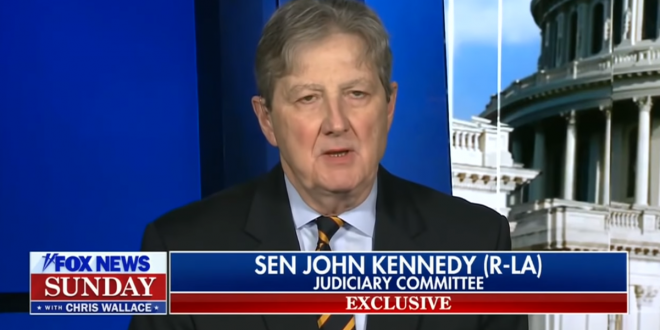 Sen. John Kennedy (R-La.) reiterated a debunked conspiracy theory on “Fox News Sunday” that Ukraine may have interfered in the 2016 presidential election by hacking the Democratic National Committee’s computer servers, despite consensus in the U.S. intelligence community that Russia was responsible for the attacks.

Kennedy’s comments come after former National Security Council official Fiona Hill publicly testified in an impeachment hearing last week that the conspiracy is “a fictional narrative that is being perpetrated and propagated by the Russian security services themselves.”

“The unfortunate truth is that Russia was the foreign power that systematically attacked our democratic institutions in 2016,” Hill said. “This is the public conclusion of our intelligence agencies, confirmed in bipartisan congressional reports.”

He was briefed that this is a Russian narrative by intelligence officials & still repeated it.

How far is too far?

We have sitting Senators actively spreading our enemies propaganda.
https://t.co/tCi6w5DmzF

Chris Wallace Pushes Back on GOP Senator Saying ‘I Don’t Know’ If Russia or Ukraine Interfered in 2016: Every Intel Agency Says Russia https://t.co/M0XZO4atab

On FOX News Sunday: Louisiana Senator John Kennedy reacts to President Trump saying Ukraine may have the DNC server, an idea that runs contrary to the intelligence community. Chris asks Senator Kennedy who he thinks is responsible for hacking the DNC. #FNS #FoxNews pic.twitter.com/zBbzuoXSje

Disinformation is worse than a lie

It tries to kill faith that there is any truth.

Question: “Who do you believe was responsible for hacking the DNC…was it Russia or Ukraine?”