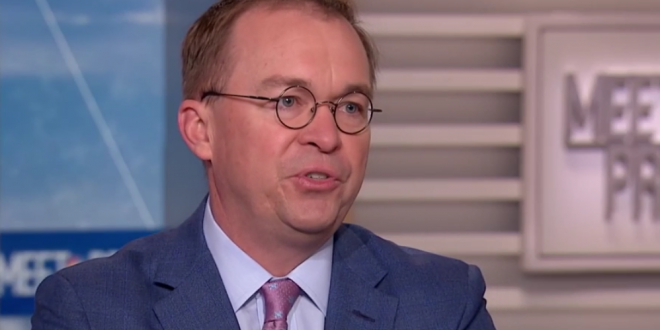 From a statement issued this afternoon by Mick Mulvaney:

Fiona Hill’s testimony is riddled with speculation and guesses about any role that Mr. Mulvaney played with anything related to Ukraine. She bases much of her testimony about him on things allegedly heard from unnamed staffers, guards in the West Wing, and “many people.” The fact is that Ms. Hill has never met Mr. Mulvaney other than in passing, and has never discussed anything with him regarding Ukraine.

We have no idea why Ms. Hill believes Mr. Mulvaney was so heavily involved, especially in light of Ambassador Sondland’s contrary testimony that he only spoke very infrequently to Mr. Mulvaney and had zero substantive conversations with him about Ukraine. This inquiry continues to be a sham. No court in this country would give any weight to testimony about Mr. Mulvaney as speculative as Ms. Hill’s. Neither should Congress or the public.