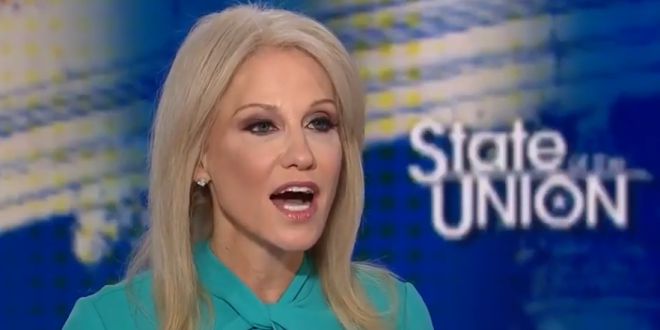 Appearing on CNN’s State of the Union, Conway first attempted to claim that Biden—who is currently a national frontrunner among Democratic presidential candidates—was not a political rival of Trump’s.

After Conway claimed Trump was merely interested in unsubstantiated claims that the Bidens were guilty of wrongdoing in Ukraine because of public reports about Hunter Biden’s business dealings, she went on to say she was confident Trump never mentioned the 2020 election during his July phone call with the Ukrainian president.

How, on earth, am I still watching Kellyanne Conway steamroll over CNN anchors with nonsense and whataboutism and cognitive dissonance…three years into this presidency?

The only question to put to her: “When did you sell your soul?”#CNNSOTU

#CNNSOTU CNN why do y’all get persons like Kellyanne Conway on your program. If U ask her – “Whats your name” she answers “I had burgers for Lunch”. CNN is an Internationally Prestigious channel. Please Don’t Degrade your Reputation by inviting such Mannerless Liars !

CNN’s Dana Bash after repeatedly asking Conway if there was quid pro quo between Trump and Ukraine: “Kellyanne, you very notable won’t say yes or no.” pic.twitter.com/OW3LphNJoW

“I don’t know whether aid was being held up,” Kellyanne Conway told CNN.

Conway then told “Fox News Sunday” if Trump conditioned aid on a Biden probe, it would not be impeachable.

“Is it a high crime and misdemeanor? I wouldn’t think so,” she said.https://t.co/Mpj75YgCLp