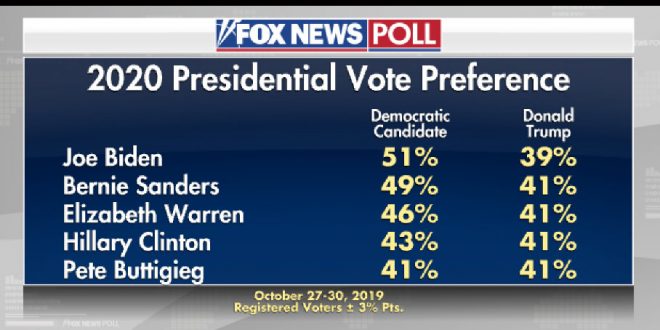 Biden leads the nomination race with the backing of 31 percent of Democratic primary voters, followed by Elizabeth Warren at 21 percent, Bernie Sanders at 19 percent, and Pete Buttigieg at 7 percent. In early October, Biden was at 32 percent, Warren 22, Sanders 17, and Buttigieg 4.

Kamala Harris and Andrew Yang receive 3 percent apiece, followed by Cory Booker, Tulsi Gabbard, and Amy Klobuchar each at 2 percent, and Tom Steyer at 1 percent. Compared to March, the first Fox News Poll on the race, Biden’s support is unchanged, while Warren has gained 17 points, Buttigieg is up 6 and Sanders is down 4.

Fox News Poll: As Trump makes gains against Warren and Sanders, only Biden increases his lead from last month.

Trump can not get above 41% against *anyone* – a massive red flag. pic.twitter.com/csB8gSZCDe