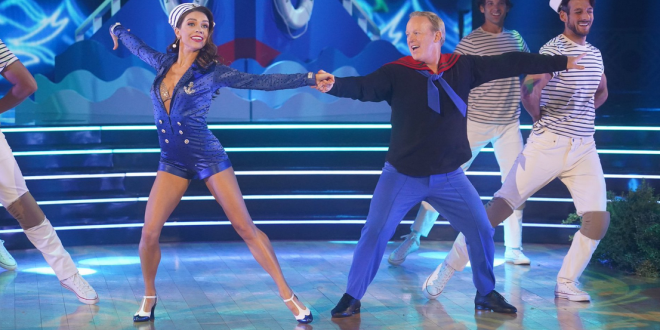 Sean Spicer’s continued success on Dancing With the Stars is beginning to frustrate viewers. Despite consistently low scores for his dancing from the judges, Spicer has remained on the show because of his relationship with President Trump. Since the beginning of the season, Spicer has run his appearance on the show like a political campaign. In fact, he has received multiple endorsements from his former employer, President Trump.

The judges are also becoming more and more frustrated by Spicer’s continued success, and it’s showing in their critiques. After Spicer’s performance tonight, head judge Len Goodman said, “We keep throwing you out the boat, and the viewers keep throwing you a life preserver.” And since the theme of Spicer’s dance was nautical, he added, “Your feet, well, the mermaid had better feet than you.”

Vote for Sean Spicer on Dancing with the Stars. He is a great and very loyal guy who is working very hard! #MAGA https://t.co/JGvKANCRqZ

Congrats to @seanspicer for making it through another week on #DWTS ! It brings me such joy to see the frustration on the faces of the judges and hosts week after week. #Referendum

INSTRUCTIONS:
Vote NOW until 10 pm ET so Sean will STAY on the show!⬅️

I don’t know why Dancing With the Stars judges and audience are so frustrated that Sean Spicer has not been eliminated, they made up the rules! Sounds so familiar to the 2016 election, the will of the people just don’t matter to these people!#MAGA

For the record I don’t usually watch @DancingABC

Watching only to @seanspicer and to make hollywood cry 😢 #MAGA