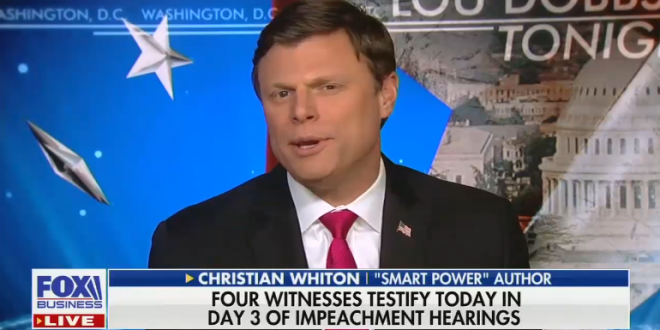 “You see Vindman, this bureaucrat who poured himself into an Army outfit to go and frankly speak contemptuous things against the commander-in-chief, incidentally, a violation of the Uniform Code of Military Justice. If you did that as a private in the Army you would get court martialed. I guess if you’re, you know, a never-Trump bureaucrat deep state crybaby you get away with it.

“This is the way the deep state works, they take detailees, not the best from these agencies, often the worst, they stick them into the White House. It’s a practice that frankly should end, and the political appointees, Tim Morrison and Volker aren’t mistaking themselves for the president, it’s these deep state bureaucrats that do.” – Former Trump advisor Christian Whiton.

RELATED: Whiton last appeared on JMG when he declared that Democrats are “trying to replace native-born Americans” with Latinos.