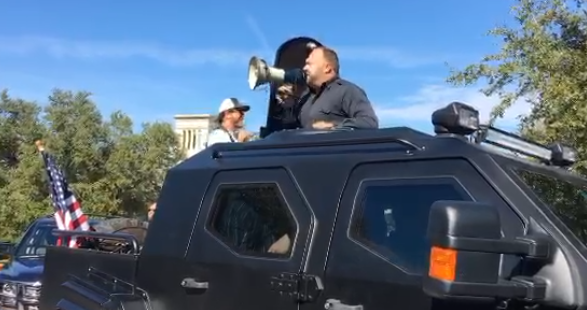 So this happened over the weekend:

Infamous Infowars founder Alex Jones crashed Hillary Clinton’s signing of her new book, “The Book of Gutsy Women: Favorite Stories of Courage and Resilience” in an armored tank in Austin, Texas at the Riverbend Church.

Cecil Richards, the former president of Planned Parenthood Federation of America, was also in attendance at the event.

Jones yelled through a megaphone at supporters, “Hillary Clinton is a devil-worshiping criminal.” Alex Jones has been banned from social media and has essentially become a persona non grata.

Jones’ stunt was live-streamed by Infowars host Owen Shroyer, who also screamed abuse at people lined up to enter the event, accused them of supporting pedophilia and being devil-worshipers, etc etc.

As you can see in his clip, some of the attendees weren’t having it, with one woman raising her pinky at Shroyer, saying, “Your dick must be THIS big.” (You have to click the tweet over to Twitter to see the live-stream.)

Shroyer last appeared on JMG in June when he called for lynching President Obama. Prior to that, he appeared here for declaring that John Kerry had destroyed a hurricane with a laser beam fired from Antarctica. Yeah.