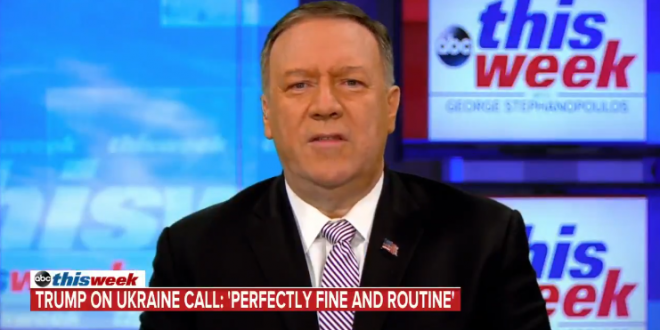 Joe Biden has called on Trump to disclose the transcript of his conversation with Zelensky so “the American people can judge for themselves.”

When asked about releasing the transcript, Secretary of State Mike Pompeo told ABC News that “those are private conversations between world leaders and it wouldn’t be appropriate to do so except in the most extreme circumstances.”

The intelligence community inspector general has described the whistleblower’s August 12 complaint as “serious” and “urgent,” conditions that would normally require him to forward the complaint to Congress. Trump has characterized the complaint as “just another political hack job.”

As you can see below, Pompeo got his marching orders to repeat Trump’s lies about Biden on every Sunday show.

“You just gave me a report… none of which I’ve seen,” Secretary of State Mike Pompeo tells @martharaddatz when asked about a report that President Trump pressed the President of Ukraine to work with Rudy Giuliani to investigate Joe Biden’s son. https://t.co/CaWsz4XapY pic.twitter.com/coDl6mG6Dy

A telling interview with @SecPompeo by @margbrennan. Besides endorsing Trump & Giuliani’s demands of Ukraine on Biden, Pompeo dodges 2 questions: 1) Did State Dept. help with that? 2) Did Pompeo himself ask Ukraine to do an investigation? Pompeo’s refusal to answer is revealing. https://t.co/x1ozC5Qr1k

Sec Pompeo on how Trump decides to provide support to Ukraine: “Those conversations have always been 100% appropriate, 100% lawful and 100% ensuring that the American taxpayers were protected, that we put those resources to good use and we got good outcomes in Ukraine…” on Fox

Previous Mnuchin: Ukraine Call Should Be Kept “Confidential”
Next Corey Lewandowski: The Smug Assholery I Displayed During My Testimony Proves I’ll Be A Great US Senator