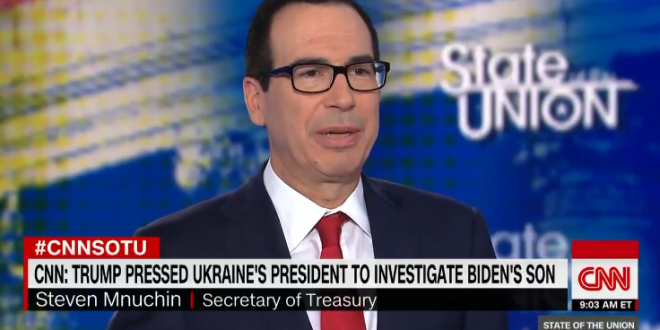 “I think things are being implied that just don’t exist,” Mnuchin said on CNN’s “State of the Union.” Tapper on Sunday pressed Mnuchin on why the White House is withholding information.

“Conversations with foreign leaders are supposed to be confidential,” he said, adding that it would be a “terrible” precedent to release the details. No evidence has emerged to suggest Biden acted with his son’s interests in mind in regards to his dealings with Ukraine.

Mnuchin: “What I find inappropriate is at the time VP Biden’s son did significant biz in Ukraine & should be further investigated.”@jaketapper: So it’s ok for Trump’s kids to do biz all over the world while Trump is POTUS?
Mnuchin: “I dont want to go more into these details.”

2. Won’t even state that it’d be improper for any President to pressure foreign govt to investigate political opponentpic.twitter.com/pnW1ep7GHL

As Mnuchin insisted he didn’t want to “go into more of these details,” Tapper fired back: “Well, you’re setting a precedent that the president is violating” https://t.co/LP5JX8KDBp