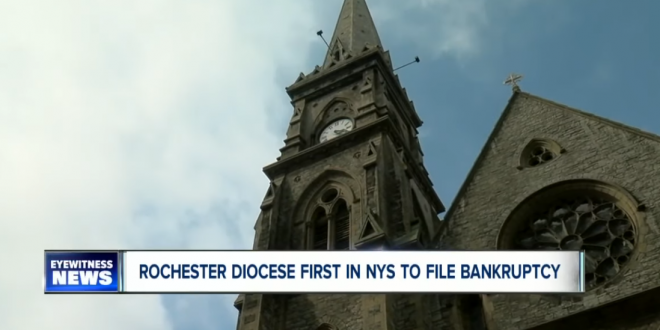 The Roman Catholic Diocese of Rochester was the first in New York to seek bankruptcy protection under the weight of new sexual misconduct lawsuits, but lawyers and church leaders say it may not be the last. All eight of the state’s Roman Catholic dioceses face financial pressures as a result of the state’s new Child Victims Act, which temporarily set aside the usual statute of limitations for lawsuits to give victims of childhood sexual abuse a year to pursue even decades-old claims.

Buffalo Bishop Richard Malone has said he is close to deciding whether to file for bankruptcy protection or litigate the nearly 140 new lawsuits his diocese is facing. The Diocese of Albany, meanwhile, faces more than 30 lawsuits so far, but spokeswoman Mary DeTurris Poust said the diocese won’t make any decision until “the full financial scope” of the Child Victims Act is known. The Diocese of Rochester sought bankruptcy court protection Sept. 12 because of the new wave of lawsuits.