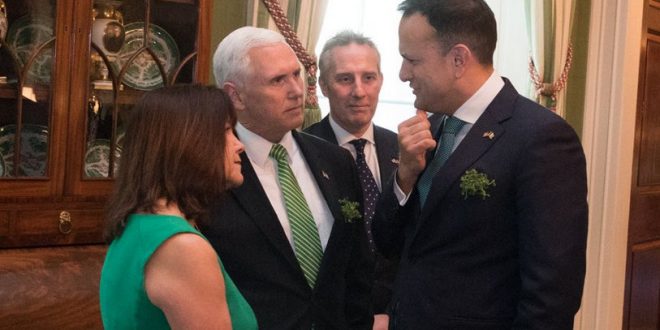 From an opinion piece in the Irish Times:

To look at Mike Pence, with all smiles and handshakes, you’d hardly think he isn’t very keen on the gays at all. Brave Mike sat down to lunch with the Taoiseach and his partner Matthew and managed not to choke on his Dublin Bay prawns. The VP’s wife Karen, who recently took up a part-time teaching position in a school which bans LGBT pupils and staff, kept her fillets of venison down despite the company.

The next prime minister the couple will meet on their trip will be the serial philander Boris Johnson. He’s pretty experienced on the extramarital and premarital sex front, which they abhor. On Tuesday, to be on the safe side, nobody was left alone with the US vice-president in case it might upset him. “We have both been blessed with Irish mothers,” Pence told the Taoiseach when they met the press. He didn’t say anything about Indian fathers (in Leo’s case) but there you go.

“I carry Ireland with me wherever I go,” said Pence, speaking of an old Ireland, one his ancestors left generations ago. Still, his visit was a great example of diversity in action. President Trump, who recently visited, is very hands-on with women and likes to grab them in all sorts of places. And his second in command is the opposite. He won’t stay on his own with a woman who isn’t his wife. God bless America.

You really should read the full shade.