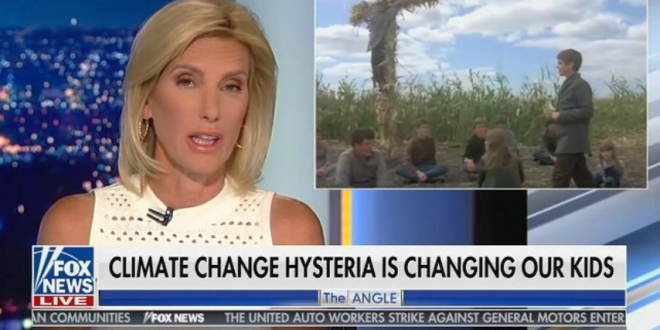 Ingraham Compares Greta To “Children Of The Corn”

Hours after a Fox News guest described 16-year-old climate activist Greta Thunberg as a “mentally ill Swedish child,” Fox News host Laura Ingraham took a shot at the teenager by comparing her to the children in a Stephen King horror film.

Playing video of Thunberg calling out world leaders at the United Nations Climate Action Summit, Ingraham then asked: “Does anyone else find that chilling?”

Viewers were next shown a clip from the 1984 movie “Children of the Corn,” which centered on Christian fundamentalist children who ritually murder all the adults in their small town. “I can’t wait for Stephen King’s sequel, ‘Children of the Climate,’” Ingraham deadpanned while an image from the film hovered over her shoulder.

LOL. Fox News apologizes for @michaeljknowles sick comments tonight, but are still so far totally fine with Laura Ingraham comparing Greta Thunberg to the Children of the Corn. What disingenuous bullshit. https://t.co/IKhPwvhjwf