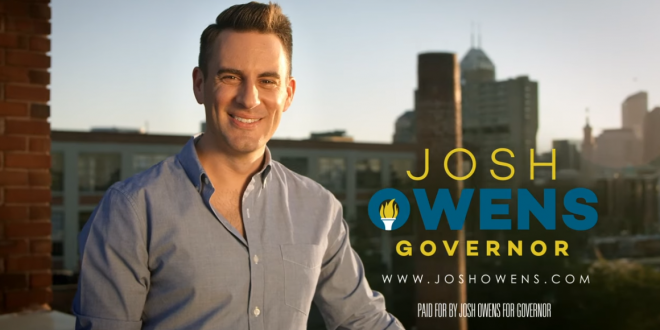 Josh Owens filed paperwork today to enter the 2020 Governor’s race. “I’m running for Governor now because I believe in an Indiana where teachers are paid what they deserve and where all are welcomed, respected and protected,” Owens said.

“We need a leader who will ensure our state budget, policies and laws reflect a bold and inclusive vision for collective Hoosier success.” The business leader and education advocate is the first openly gay gubernatorial candidate in Indiana.

The 34-year-old Democrat from Shelbyville, Indiana is head of one of the state’s fastest growing companies, SupplyKick. He also serves on the boards of TechPoint Indiana, Indy Chamber, the Orr Fellowship and previously chaired the Indiana Charter School Board.

Previous Gay Man Says Church Members Surrounded, Held Him Down, Spoke In Tongues To Drive Out His Gay Demons
Next Gabbard: Trump Is “Pimping US Out” To Saudi Arabia