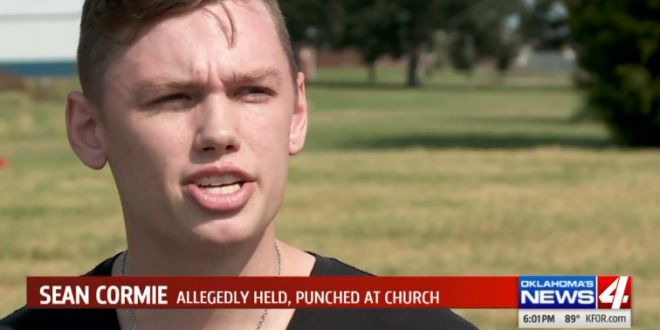 Gay Man Says Church Members Surrounded, Held Him Down, Spoke In Tongues To Drive Out His Gay Demons

A church’s actions are under investigation after a man said he was held down by congregants as they tried to pray away his homosexuality. Sean Cormie, 23, came out as gay in the spring. Since then, he said his family has asked him to go to church and bring his partner, Gary Gardner.

On Sunday, Sept. 8, the two joined family and friends for a service at a church Cormie had already attended many times. The service was normal but at the end, something unexpected happened. Cormie said as 12 to 15 congregants circled around Gardner and himself, their prayer growing louder.

“They hold me down, pin me down, and I’m crying, and they keep speaking in tongues, praying over me.” Cormie said he was even punched in the face. “I was just crying ‘mercy, mercy.'” When they finally let him up, he went to the Blackwell Police Department to file a report.

Cormie said he’s since been threatened for filing the police report and believes his own family members set him up for the attack.

Previous Christian Prophet: Carry A Gun Because The Red Cross Is “Grabbing People” To Use Them For Food [VIDEO]
Next Indiana Gets First Openly Gay Gubernatorial Candidate