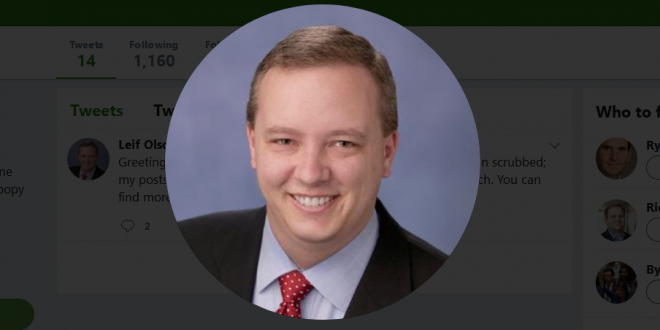 A recently appointed Trump Labor Department official with a history of advancing controversial conservative and faith-based causes in court has resigned after revelations that he wrote a 2016 Facebook post suggesting the Jewish-controlled media “protects their own.”

Olson, 43, started at the Labor Department’s Wage and Hour Division Aug. 12 as a senior policy adviser, after being cleared for the job by the White House. He was part of a team of political appointees working to finish a series of deregulatory actions that are pivotal to the White House employment agenda.

Much of his solo work was devoted to a longstanding case in which he represented two Houston residents who sued the city’s mayor in 2013 arguing an ordinance recognizing same-sex marriage licenses issued out of state violated a Texas law prohibiting such arrangements. Olson’s legal team convinced the judge in the case to issue an injunction barring the Houston policy.

Greetings, Bloomberg readers. I never thought I’d see the day when making fun of alt-right anti-Semites led to being branded an anti-Semite, but here we are. A few comments:

1. The Pidgeon v. Parker case was filed before the U.S. Supreme Court issued its decision in Obergefell v. Hodges. I assisted with a technical jurisdictional issue when the case was argued before the Supreme Court of Texas, but, far from being “much of [my] work,” I otherwise haven’t worked on it since Obergefell was issued. Please see the Harris County District Clerk, the Texas First Court of Appeals, and the Texas Supreme Court for more.

Greetings, Bloomberg readers. No, my Twitter account hasn’t been scrubbed; my posts automatically delete after 2 weeks, and I don’t post much. You can find more here: https://t.co/71NyhoA0Y7