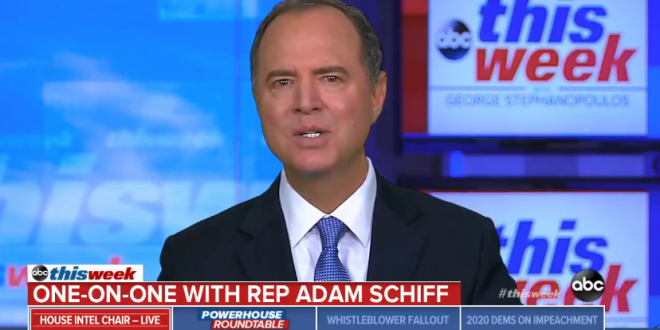 Adam Schiff: The Whistleblower Has Agreed To Testify

Appearing on ABC News’ This Week, Schiff said the whistleblower would appear with their attorneys, but not “minders” from either the Justice Department or the White House.

“We’ll get the unfiltered testimony of that whistleblower,” said Schiff, who has so far taken the lead on the recently announced impeachment inquiry of Trump.

NEW: Adam Schiff has reached agreement with whistleblower to come before House Intelligence Committee, he tells @ThisWeekABC, and says he expects to hear from the whistleblower “very soon.” https://t.co/uMWxTeYU29 pic.twitter.com/VXtiTiUTm2

Previous Miller: The Whistleblower Is A “Deep State Operative”
Next Graham: Dems Are Afraid To Hold Impeachment Vote