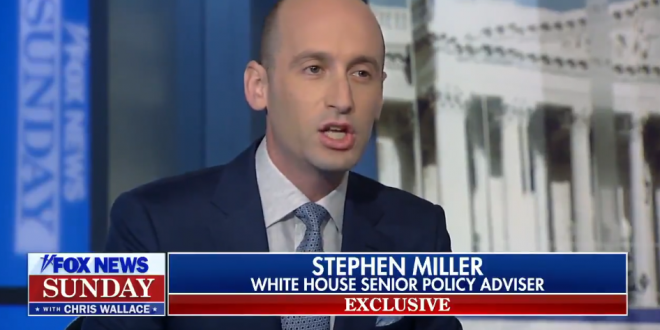 Miller: The Whistleblower Is A “Deep State Operative”

White House senior adviser Stephen Miller claimed on “Fox News Sunday” that the whistleblower who filed a complaint about President Trump’s interactions with Ukraine is a “deep state operative” who does not deserve to be honored for forwarding a “partisan hit job.”

Reality check: Miller has no evidence of who the whistleblower is. He also cited the intelligence community inspector general’s finding that the whistleblower displayed “arguable political bias,” but dismissed the IG’s assessment that the complaint was “credible” — which has also been backed up by acting Director of National Intelligence Joseph Maguire.

WATCH: Stephen Miller refuses to answer why Trump used private lawyers as his emissaries to the Ukrainian government?

Chris Wallace: “You have your non-answer at this point.” pic.twitter.com/jAknD6gt4h

“You have your non-answer” — watch Chris Wallace grill Stephen Miller about why Trump thought it was appropriate to use his private attorney to dig up dirt on Biden — and not let Miller get away with obfuscating. pic.twitter.com/wKr1fpIX5Z

Chris Wallace asks Stephen Miller why Present Trump use his private attorney and as we just reported, two other private lawyers, to dig up dirt on Joe Biden. #FNS #FoxNews pic.twitter.com/OzZMrRusq7

Previous Giuliani: I’ll Only Testify If Trump Tells Me To [VIDEO]
Next Adam Schiff: The Whistleblower Has Agreed To Testify