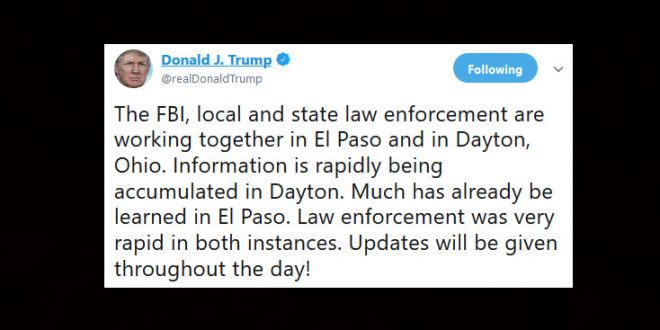 Dayton police patrolling the area responded in less than a minute to the shooting, which unfolded around 1 a.m. Sunday on the streets of the Oregon District, Dayton Mayor Nan Whaley said at a press conference.

The gunman, who has not been identified by authorities, was shot to death by responding officers. Whaley said he was carrying a .223-caliber rifle and had additional high-capacity magazines with him. Police believe there was only one shooter, and have not yet identified the suspect or a motive.

The FBI, local and state law enforcement are working together in El Paso and in Dayton, Ohio. Information is rapidly being accumulated in Dayton. Much has already be learned in El Paso. Law enforcement was very rapid in both instances. Updates will be given throughout the day!

Previous Pope Francis Condemns US Epidemic Of Mass Shootings
Next KENTUCKY: Protesters Taunt McConnell With Chants Of “Moscow Mitch” As He Tries To Address Crowd [VIDEO]