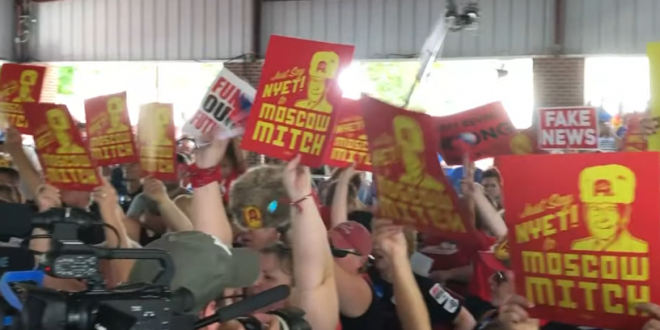 KENTUCKY: Protesters Taunt McConnell With Chants Of “Moscow Mitch” As He Tries To Address Crowd [VIDEO]

McConnell and his team have taken the attacks, spawned from his refusal to take up election security measures, more personally than previous barbs. But Kentucky’s senior senator did his best to ignore those hecklers during Saturday’s speech.

“I’m going to spend as much time talking about (Democrats) as Kentuckians will voting for them this November — none,” McConnell announced.

In his first public appearance of the August recess, Mitch McConnell was greeted by loud chants of #MoscowMitch that drowned out his speech. It infuriated him. Buying Say Nyet to #MoscowMitch merch would make him even more mad: https://t.co/4H4YvzArbK pic.twitter.com/F9vX3Rv6LB

Listen as a crowd of Kentuckians drowns out @senatemajldr with chants of “Moscow Mitch” today at Fancy Farm. Cc @KyDems pic.twitter.com/Ds5jSJOl5c

I’m in Western Kentucky for Fancy Farm (look it up) and the @KyDems have apparently broken every fundraising record selling these t-shirts. Crazy! pic.twitter.com/z0rqCSmHTf