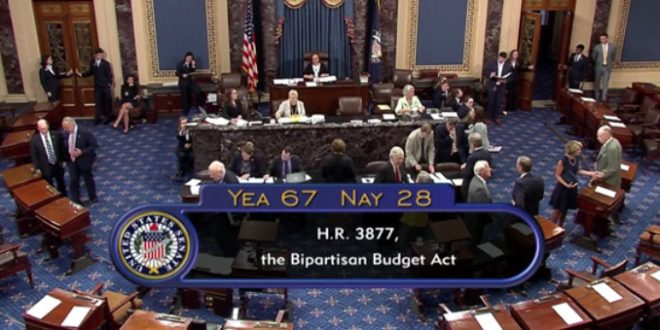 Senate Votes To Lift Debt Ceiling For Next Two Years

The Senate on Thursday passed a bill to raise the U.S. budget and lift the debt ceiling for the next two years. The spending deal now heads to the Oval Office to be signed by President Donald Trump. The legislation passed 67-28, with 23 Republicans and five Democrats voting against the bill.

Its passage in Congress — shortly before senators left Capitol Hill to return to their states — will push off the threat of a financial crisis and automatic spending cuts that were set to kick in. The bill passed the House last week despite weak support from Republicans, even after Trump urged them to vote for the deal.

The bill raises spending by hundreds of billions of dollars, setting discretionary spending at about $1.37 trillion in fiscal year 2020 and even higher in 2021. Meanwhile, total U.S. government debt now tops $22 trillion, and the Office of Management and Budget projects a $1 trillion deficit for 2019.

Previous Democrats Rage After Lindsey Graham Breaks Senate Rules To Ram Through His Anti-Asylum Bill [VIDEO]
Next Michael Moore: Only One Person Can “Crush” Trump