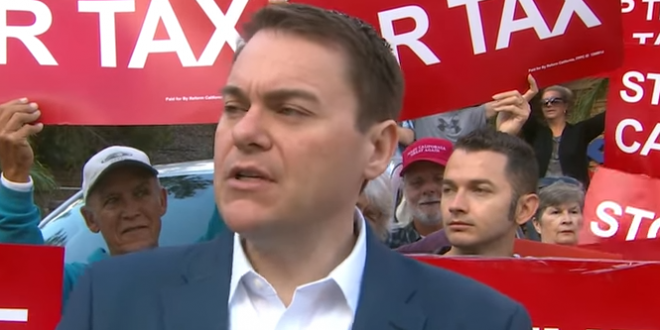 SAN DIEGO: Homocon Carl DeMaio To Run For US House To Do “What Fascist AOC Does But With An IQ”

On Monday DeMaio announced he will run in 2020 for the congressional seat currently held by Hunter, the embattled six-term incumbent representing California’s 50th District, an area that includes eastern and northeastern San Diego County.

Since leaving San Diego City Council in 2012, DeMaio has come up in short in every other bid he’s made for elected office, including a failed mayoral bid in 2012 and a failed congressional bid in 2014 in the 52nd District challenging Rep. Scott Peters, D-San Diego.

On what could be his last radio show — because he’d have to pay for air time as an announced candidate — DeMaio took six calls. All favored a run for Congress. One caller was fellow media personality Graham Ledger of San Diego-based One America News. Ledger told DeMaio: “If you don’t run … it would be criminal.”

The nation’s founders wanted members of Congress to be “people like you,” Ledger said. “You’re just the man to do it.” Gen X’er DeMaio, 44, frequently cited millennial Alexandria Ocasio-Cortez, the Democrat from New York City he calls one of the “Fascist Four.”

He said if he won a Congress race, he’d use his office to “basically do what AOC does — but with an IQ.” Ledger said: “You have to remove some gray matter to make it fair.”