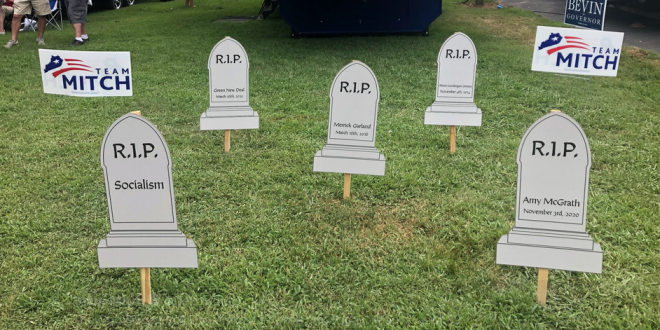 This tweet was questionable to begin with. The timing made it even worse. Over the weekend, a mass shooting in El Paso, Texas left 22 people dead, and another in Dayton, Ohio killed nine people. But that didn’t stop Senate Majority Leader Mitch McConnell’s (R-Ky.) campaign Twitter account from sharing a photo of his political opponents’ names written onto tombstones hours after the first shooting happened.

Hours after the El Paso shooting, Mitch McConnell proudly tweeted this photo. I find it so troubling that our politics have become so nasty and personal that the Senate Majority Leader thinks it’s appropriate to use imagery of the death of a political opponent (me) as messaging. pic.twitter.com/2x5kO5jwPi

It’s symptomatic of what is wrong with our system. I’m fine with the ordinary rough and tumble of politics, but this strikes me as beyond the pale.

Previous SAN DIEGO: Homocon Carl DeMaio To Run For US House To Do “What Fascist AOC Does But With An IQ”
Next China Halts Purchases Of US Agricultural Products