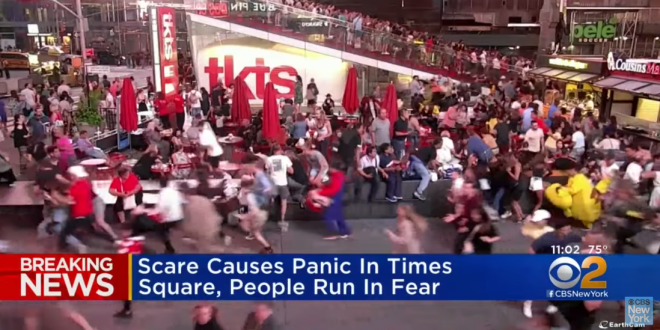 In Times Square Tuesday night, video captured people running for safety from the tourist attraction, but the NYPD’s Midtown North district tweeted that the sounds was from motorcycles. “Motorcycles backfiring while passing through sounded like gun shots,” the NYPD said, adding that it received multiple 911 calls. “Please don’t panic. The Times Square area is very safe!”

Bridget Siljander said that she was coming out of a theater and “there was a big stampede, and people were screaming and crying and climbing over each other.” She was briefly separated from her daughter amid the chaos, she said. “We were turning around to take a picture in Time Square, and we just see a herd of people screaming and yelling ‘shooter,'” Jade Crowe, who was visiting the popular tourist spot with her family, told NBC News.

Backfiring motorcycles were mistaken for gunshots from an active shooter, causing panic in Times Square on Tuesday. https://t.co/csPgn0DTcr pic.twitter.com/OD3PufD7yv