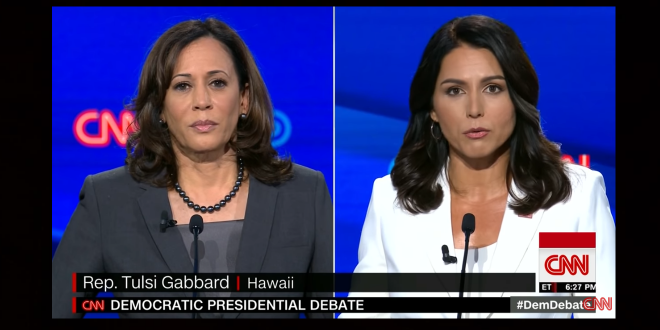 The most talked about exchange from last night.

The Hawaii congresswoman dug up a thick opposition file on Harris and dumped it on the debate stage. For several minutes, Gabbard detailed some unsavory accusations against Harris during her tenure as California state attorney general. Harris pushed back, but the unexpected assault left some bruises that other candidates are likely to pick at in future debates.

“She blocked evidence that would have freed an innocent man from death row until the courts forced her to do so,” Gabbard said. “She kept people in prison beyond their sentences to use them as cheap labor for the state of California.”

Harris jabbed back by saying the she made “a decision to not just give fancy speeches or be in a legislative body and give speeches on the floor, but actually doing the work of being in the position to use the power that I had to reform a system that is badly in need of reform.”

Tulsi Gabbard the most searched for 2020 Democrat during #DemDebate https://t.co/Ym7XjxapbL

Rep. Tulsi Gabbard on Sen. Kamala Harris’ time as prosecutor: “I’m concerned about this record of Senator Harris. She put over 1,500 people in jail for marijuana violations and laughed about it when she was asked if she ever smoked marijuana.” https://t.co/UHkoBEovjF #DemDebate2 pic.twitter.com/xGy91CLKqI

Sen. Kamala Harris responds to Rep. Tulsi Gabbard’s criticism of her record as a prosecutor during the #DemDebate. https://t.co/iHUZhu7oJl pic.twitter.com/cyyEW9I8zK