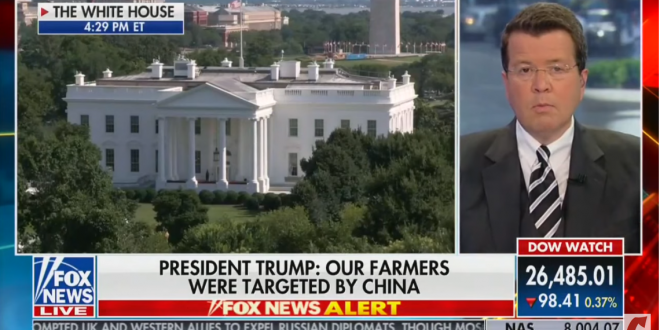 President Donald Trump addressed press pool reporters Friday on the White House lawn and said China’s currency has devalued because they “pay for the tariffs.” As soon as the video cut back to Fox News, host Neil Cavuto laid into Trump with an immediate fact-check.

Right away, Cavuto cut away from the president’s impromptu press gaggle to point out that, once again, Trump was not telling the truth when it came to who pays for tariffs.

“I don’t know where to begin here. Just to be clarifying, China isn’t paying these tariffs. You are. You know, indirectly and sometimes directly. It’s passed along to you through American distributors and their counterparts in the United States that buy this stuff from the Chinese and have to pay the surcharges. Not the Chinese government.”

Cavuto went on to say that he does not understand what the president was talking about regarding “devaluation of added cost in China” before noting that this latest round of tariffs “will be felt by consumers directly.”