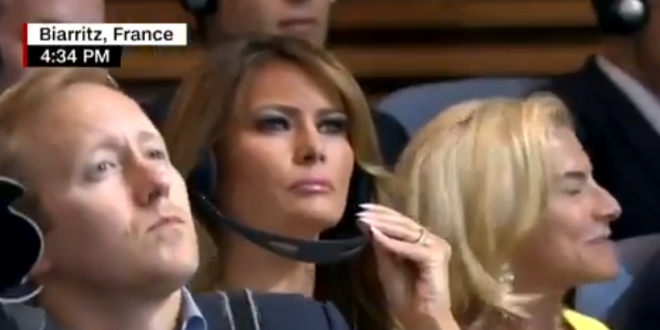 Today, a viral clip on Twitter seems to be proving that not only does Melania not speak French, but that she forgot she told everyone she could.

During a joint press conference between French President Emmanuel Macron and her husband Donald Trump, Macron spoke French for any long-form answers that were necessary to questions from reporters — the G7 Summit is, after all, being held in France, and it is his prerogative to speak in the native tongue there.

We’re not sure whether it was English or Slovenian being pumped into Melania Trump’s headset in this clip, but we do know that Melania needed a headset because she doesn’t speak French.

Um, didn’t they say Melania Trump speaks fluent French? I guess like her degree in Architecture, that is also a lie. #G7Summit #TrumpLies pic.twitter.com/hfzKzU2npN

Melania had on headphones during the presser between Macron and Trump, I though she spoke French?

If Melania speaks French, Why is she listening to Macron via translator? #G7Summit #G7Biarritz #maga