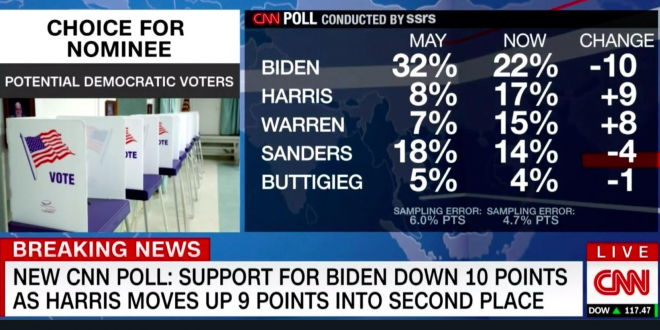 Sens. Kamala Harris and Elizabeth Warren have made steep gains after the first Democratic presidential debate, a new CNN poll conducted by SSRS. shows, with former Vice President Joe Biden’s lead over the field shrinking to a narrow 5 points. The results indicate a significant tightening in the race for the Democratic nomination.

The poll, conducted after the two-night debate, finds 22% of registered voters who are Democrats or Democratic-leaning independents backing Biden for the party’s presidential nomination, 17% Harris, 15% Warren and 14% Sen. Bernie Sanders. No one else in the 23-person field tested hits 5%.

Biden dropped 10 points in the new CNN poll. Kamala Harris and Elizabeth Warren have both gained significantly. Bernie Sanders and Pete Buttigieg have slight drops (within the margin of error). pic.twitter.com/asAzJjudDH