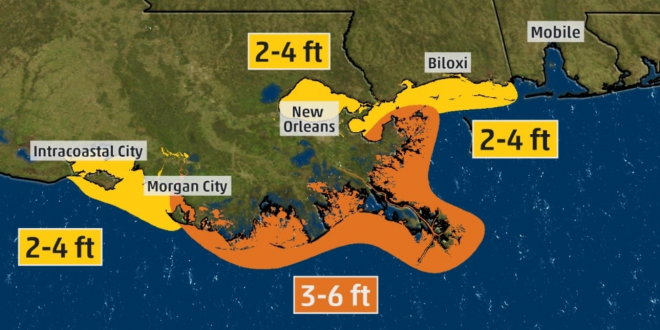 Thousands of Louisianans broke out sandbags or fled to higher ground Thursday as Tropical Storm Barry threatened to turn into the first hurricane of the season and blow ashore with torrential rains that could pose a severe test of New Orleans’ improved post-Katrina flood defenses .

National Guard troops and rescue crews in high-water vehicles took up positions around the state as Louisiana braced for the arrival of the storm Friday night or early Saturday. Barry could have winds of about 75 mph (120 kph), just barely over the 74 mph threshold for a hurricane, when it comes ashore, making it a Category 1 storm, forecasters said.

But it is expected to bring more than a foot and a half (0.5 meters) of rain in potentially ruinous downpours that could go on for hours as the storm passes through the metropolitan area of nearly 1.3 million people and pushes slowly inland.

Some dry air + wind shear has half of the storm free of widespread storm activity, likely limiting what would otherwise be quick intensification. pic.twitter.com/F0wbhhD6iX

As a major storm nears, all eyes are on flood-control improvements intended to protect low-lying New Orleans after Katrina; drainage pumps are working, officials say, but “we cannot pump our way out of the water levels expected…”@BojorquezCBS has more https://t.co/NbENkdPbzy pic.twitter.com/Bm18vy96IG

Army Corps of Engineers Chief of Public Affairs Ricky Boyett discusses the potential levee breaches #NewOrleans could face from Tropical Storm #Barry and how the system is designed to protect the city pic.twitter.com/GrXyN79ZoF

Parts of New Orleans have become completely submerged due to severe flooding — now the city’s levees are at risk pic.twitter.com/Z90vj1IiLC