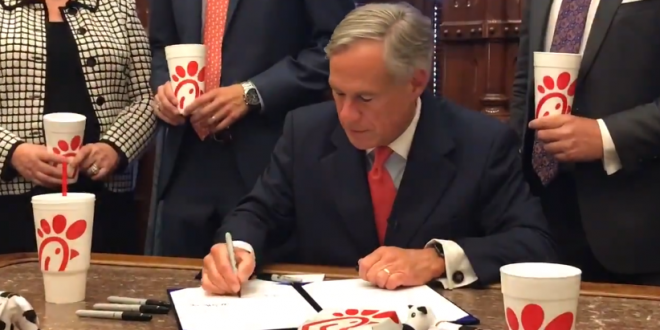 Abbott actually signed the bill into law over a month ago, so this bit of hate theater merely serves to own the libs.

Abbott surrounded himself with associates and Chick-fil-A menu items and vowed to protect religious liberty in response to criticism citing the fast food chain’s owner’s support for anti-gay groups and opposition to gay marriage.

Abbott said at the ceremonial signing, “No business should lose a government contract because of their religious beliefs. The ‘Save Chick-fil-A’ legislation that I’m about to sign is a victory for religious liberty in Texas.”

Listen for the snickering.

Today I signed the ⁦@ChickfilA⁩ law in Texas.

And, had a great lunch.

No business should be discriminated against simply because its owners donate to a church, the Salvation Army, or other religious organization.