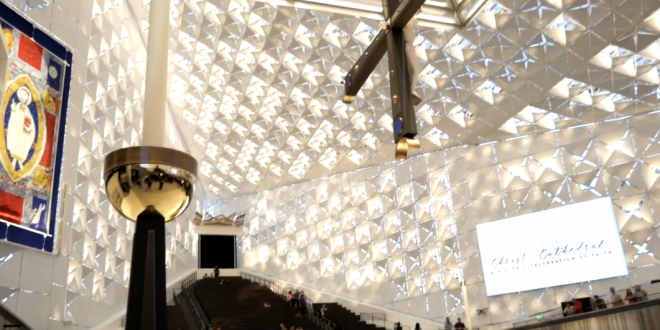 The famed Crystal Cathedral in California, which was touted as the largest all-glass structure in the world when it was officially opened in 1980, was rededicated Wednesday by the Diocese of Orange after a $77 million makeover and the blessing of Bishop Kevin Vann and Pope Francis.

Originally commissioned by late televangelist Rev. Robert H. Schuller, the founder of the Crystal Cathedral Ministries, the building had served as the backdrop of the world’s longest-running evangelistic television program in the world, “Hour of Power.”

Schuller’s church, however, went bankrupt. It was sold along with its adjacent campus in February 2012 to the Roman Catholic Diocese of Orange for future use as the diocese’s new cathedral.

In his autobiography, Schuller confessed that he built the Crystal Cathedral to impress wealthy nonreligious passersby, writing, “Suppose we had given this money to feed the poor? What would we have today? We would still have hungry, poor people and God would not have this tremendous base of operations which he is using to inspire people to become more successful and more affluent.”

VIDEO: Below is a tour of the remodeled cathedral given by a guy dressed in the Proud Boys’ trademark shirt. No idea if he’s an actual Proud Boy, but the haircut could be a clue.