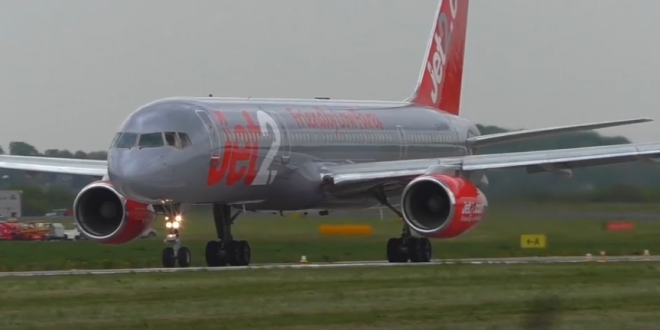 A passenger whose “extremely disruptive behavior” caused a flight to be diverted with a military escort has been sent a bill for £85,000 ($105,000) and permanently banned from the airline. Chloe Haines has been accused by British operator Jet2 of a “catalog of aggressive, abusive and dangerous behavior,” including “attempting to open the aircraft doors,” during a flight from London Stansted Airport to Dalaman in southwest Turkey in June.

The airline said that crew had to restrain Haines with the help of customers, and the aircraft was diverted back to London Stansted, escorted by two Royal Air Force (RAF) jets. The jets created a sonic boom “which could be heard for miles around” as they rushed to escort the aircraft. “Miss Haines’ behavior was one of the most serious cases of disruptive passenger behavior that we have experienced,” said Steve Heapy, CEO of Jet2.

Haines, a Costa Coffee worker who was traveling with her wheelchair-bound grandmother, sparked a hijack alert when she tried to open an emergency exit door, The Sun reported. Steven Brown, 58, a former bouncer who tackled the unhinged woman, said she kicked, punched and screamed at the flight attendants.

“She was only petite but she had the strength of a fully grown man. The only time I’ve seen anything like that was when someone had just dropped acid, she had super strength,” he said, according to The Sun.

“The woman was walking down the aisle when she literally ran to the exit door. She had her hands on the handle trying to open it. That’s when she started screaming, ‘Get off me, I’m going to kill everyone!’”