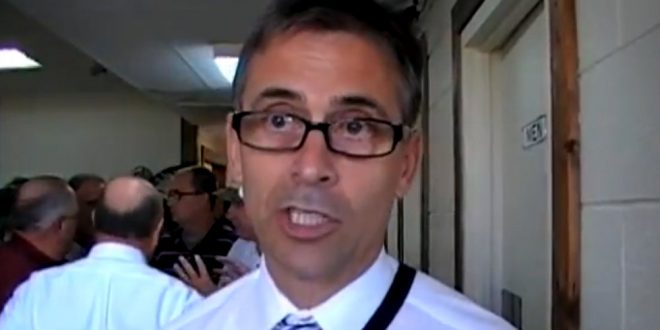 A West Tennessee Republican lawmaker says he is stepping down from the statehouse, citing a family matter and demands of his business. Rep. Bill Sanderson, R-Kenton, confirmed Tuesday night that he plans to resign from his legislative seat.

His resignation will become effective Wednesday at noon. Sanderson, who owns White Squirrel Winery in Kenton, said his business has increased significantly in recent years and he’s been unable to adequately maintain it while being a part-time lawmaker.

“It requires a full time (work),” he said, noting he lost the fruit of 135 peach trees while serving as a lawmaker this year. “I’m going to have to be at home more.”

The Friendly Atheist notes that Sanderson has voted for a raft of anti-LGBT bills, including one that bans local governments from enacting discrimination protections.

But the real story here, allegedly, is that all this went on while he was trolling for cock on Grindr, as this item lays out in extensive detail.