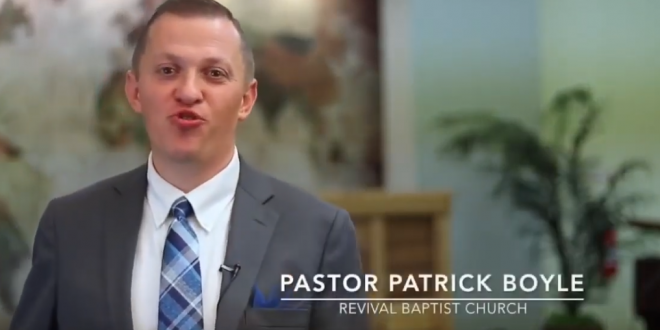 A Clermont church is planning a “Make America Straight Again” conference just days after the three-year mark of the Pulse nightclub shooting. In preparation for the event, church leaders have reached out to the Lake County Sheriff’s Office and asked if they could hire deputies to work security for the conference.

The Sheriff’s Office later declined the request, telling Channel 9 in a statement: “The fact that the timing of this conference coincides with the three-year anniversary of the Pulse nightclub shooting in nearby Orlando did not go unnoticed by our staff. We felt as though the timing of the conference is in poor taste.”

The local organizer (first clip below) says he only wants the cops there to “deter violence.” That’s surprising since one of his featured pastors has said that he welcomes violence because Florida’s “Stand Your Ground” law might allow him to murder gays. “Pray that it gets violent. I say bring it.”

The five pastors scheduled to speak at the event have all publicly called for executing LGBT people. The group’s leader, Pastor Steven Anderson, has been banned from dozens of countries for his hate speech.

Previous Glorious Leader: Am I Supposed To Call The FBI Every Time I Meet The Queen And The “Prince Of Whales”?
Next Gallup: Slim Majority Back New Civil Rights For LGBTs