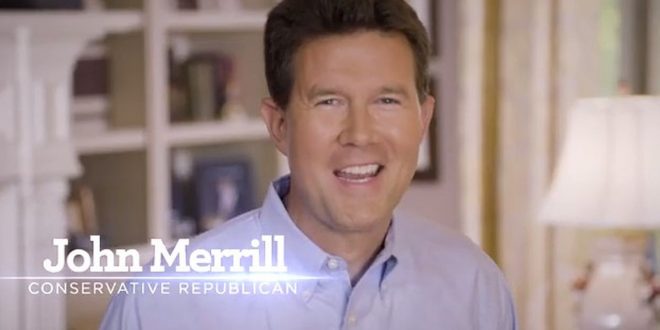 John Merrill officially announced Tuesday he will run for the U.S. Senate. Merrill made the announcement around 10 a.m. Tuesday, releasing a video on social media. The Senate seat is currently held by Democrat Doug Jones, who defeated Republican Roy Moore in a 2017 special election. In addition to Merrill and Moore, the GOP field includes former Auburn Football Coach Tommy Tuberville and U.S. Rep. Bradley Byrne.

Alabama Secretary of State John Merrill is running for Senate, and he’s highlighting his allegiance to Trump and his record on tough voter ID laws along the campaign trail:

“I’ll work with President Trump to build a wall and to keep illegals from cheating the system,” he said pic.twitter.com/hazdso2zO3

Merrill presented himself as a “conservative reformer” who could beat U.S. Sen. Doug Jones. He also said he would remain in office as Secretary of State during the campaign. https://t.co/A8jRIvaP1F #alpolitics

Alabama Secretary of State John Merrill announced from the steps of the state capitol this morning that he is in the race for Senate. #alpolitics https://t.co/95TshcqZIW pic.twitter.com/poLr3Yb4rm

John Merrill joins a crowd of dozens of people on the capitol steps this morning @WVTM13 pic.twitter.com/1d0oMGfZAi

Merrill claims he will fight “illegals” trying to take advantage of the system. Not exactly clear what he’s referencing. #alpolitics