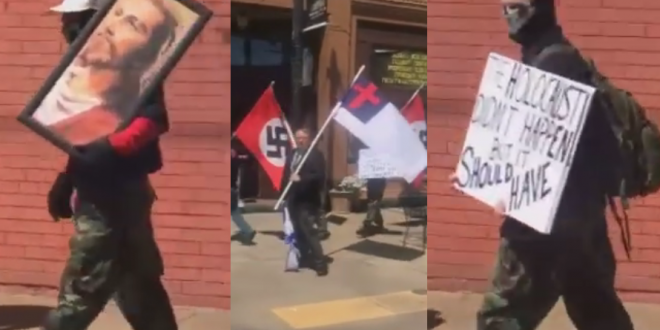 In footage from the event, Shield Wall Network members can be heard chanting “six million more,” which is a reference to the six million Jews murdered during the Holocaust.

Members of Shield Wall Network heckled a World War II veteran and Arkansas Tech University professor as they spoke at the event and the group roamed the streets of downtown Russellville behind a police line.

Last year, ATU announced a scholarship fund named for the late Dr. Michael Link. Link has been accused of being a Holocaust denier. Billy Roper, network coordinator for Shieldwall, the group that interrupted the event, says their rally was in support of Dr. Link.

“The rally that we held was a protest against the ADL (Anti-Defamation League), and Dr. Sarah Stein’s attempts to intimidate and blackmail Arkansas Tech University into removing Dr. Michael Link’s name from the scholarship he endowed, ” Roper said.