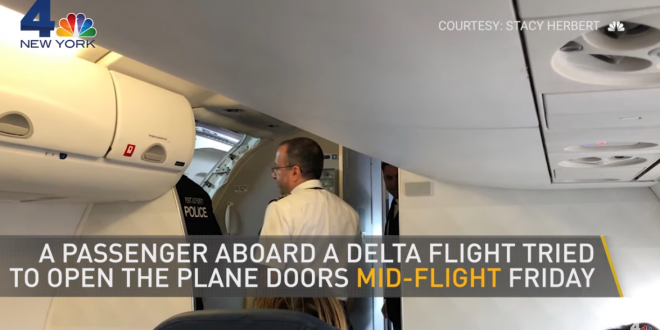 A passenger aboard a Delta flight tried to open the doors of the plane mid-flight, prompting the pilot to declare an emergency, according to live air traffic control transmission ATC.net. The plane has landed safely at LaGuardia Airport.

According to traffic control, the emotionally disturbed passenger tried to open the “forward service door” on the Delta 5935 flight from Raliegh to LaGuardia. It landed in New York City around 1:40 p.m.

At least one woman on social media tweeted the woman was “screaming her head off that she needed to open the door and die.” That woman tweeted the upset traveler’s father pulled her away from the door.

Just witnessed a young woman on our flight attempt suicide at 10,000 feet; approaching LaGuardia. She came out of the lavatory and calmly took a step toward the exit door. The flight attendant yelled something; lumbuckled and lept at her. At that moment all hell broke loose. pic.twitter.com/3e0lPH7Vbz

A suicidal woman tried to open the door of a Delta Airlines flight Friday afternoon, but the plane managed to land safely, a law enforcement source said. https://t.co/s7btUH2ndt pic.twitter.com/0FNvpwZiyO