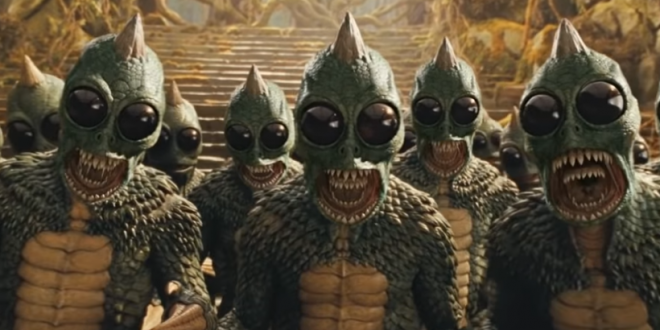 Charisma News, the site best known here for its anti-witchcraft tutorials, its claim that the lifespan of gays is shortened by 20 years, its warning that burning breakfast eggs can summon demons, and its declaration that yoga is white witchcraft, today has a message about lizard demons.

Steven Bancarz grew up in a Pentecostal, homeschooling family. But when he started becoming fascinated with aliens as a teenager, he quickly got swept up in a New Age belief  system. He became obsessed with UFOology and stories of aliens appearing to ancient civilizations. “There is a supernatural exchange that takes place between the practitioner and the demons, the principalities, that are set over this type of spirituality,” Bancarz explains.

“I saw one of them with my own eyes in a lucid dream I was having. And he pulled me out of my body.” Bancarz describes the demon as looking like a lizard in humanoid form with red skin and a red cloak.Then he stood in front of me — we’re both hovering in the air — and he had a third eye in between his two regular eyes. That represents psychic power and the New Age, and when he opened his third eye, I got sucked into it, and I was disoriented.”

If you want to know how Jesus rescued him from the lizard demon, the above-linked story notes, you’ll just have to subscribe to his podcast.

NOTE: While we have a lot of fun with Charisma News, it’s worth pointing out that the site also conducts interviews with major evangelical figures and anti-LGBT hate group leaders. And they run syndicated columns from the likes of Ann Coulter and Franklin Graham. It’s not exactly a fringe operation when compared to other Christian sites.