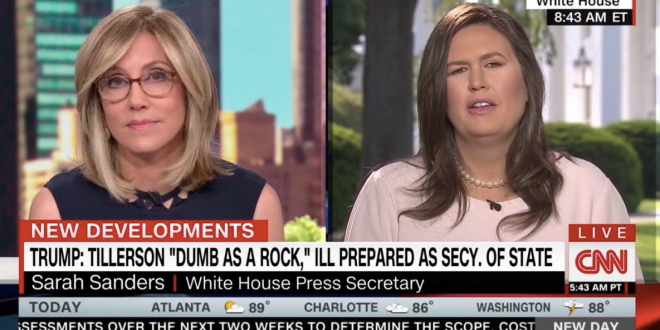 CNN Host Grills Sarah Sanders: If Trump Thinks Rex Tillerson Is Dumb As A Rock, Why Did He Hire Him?

CNN host Alisyn Camerota grilled White House press secretary Sarah Huckabee Sanders on President Donald Trump‘s tweet about former Secretary of State Rex Tillerson being “totally ill equipped” — even though Trump was the one who thought he was qualified enough to appoint. Sanders replied with a non-answer — choosing to avoid the question and focus on how supposedly prepared Trump was for his meeting with Putin.

“Look, the president’s meeting with Putin went extremely well, the president has made clear that having a relationship with Russia is better than not having one. I think everybody can agree on that. That’s a good thing. but at the same time, no one has been tougher. The president has been very well prepared not just for that meeting but the dozens and dozens of meetings that he has had with other foreign leaders.”

Rex Tillerson, a man who is “dumb as a rock” and totally ill prepared and ill equipped to be Secretary of State, made up a story (he got fired) that I was out-prepared by Vladimir Putin at a meeting in Hamburg, Germany. I don’t think Putin would agree. Look how the U.S. is doing!

White House press secretary Sarah Sanders on Trump saying he won’t work with Democrats until investigations end: “It’s real simple — you can’t go down two tracks. We’re either gonna have to agree that we want to solve problems for the country … or we can fight” pic.twitter.com/eQBX51OAWP