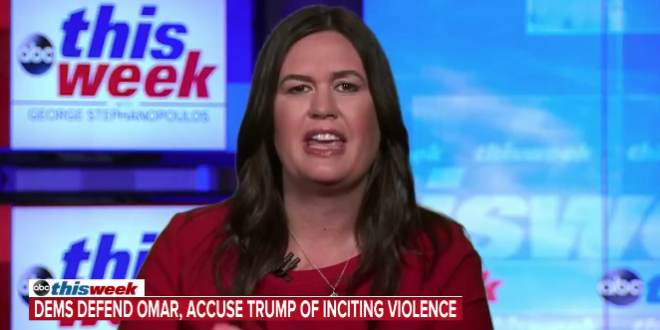 White House press secretary Sarah Huckabee Sanders said on Sunday that President Trump is not wishing “ill will” nor “violence toward anyone” after he tweeted a video showing images from the Sept. 11 attacks combined with remarks Rep. Ilhan Omar (D-Minn.) gave at a recent speech.

“Certainly the president is wishing no ill will, and certainly not violence towards anyone,” Sanders said on ABC’s This Week. “But the president is absolutely and should be calling out the congresswoman for her not only one time but history of anti-Semitic comments,” she added.

Asked about President Trump’s attack on Rep. Ilhan Omar, Sarah Sanders tells @GStephanopoulos, Omar’s comments are “absolutely disgraceful and unbefitting of a member of Congress and I think that it’s a good thing that the president is calling her out” https://t.co/OYryJReRBT pic.twitter.com/WLhC9KGoke

JUST IN: Sarah Sanders on Beto O’Rourke’s comment that Trump’s attack on Rep. Ilhan Omar “is an incitement to violence”: “The president is wishing no ill will and certainly, not violence towards anyone,” but he “should be calling out the congresswoman” https://t.co/OYryJReRBT pic.twitter.com/sKuqKjNtOl