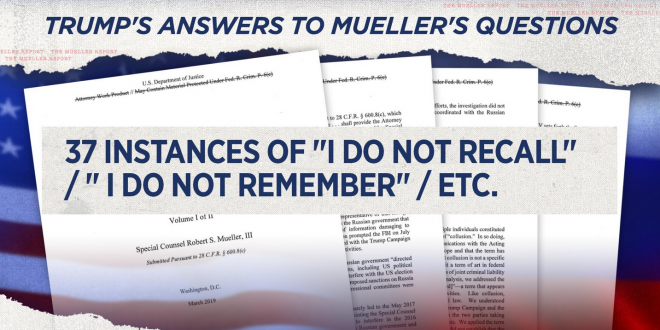 During the 2016 presidential campaign, Donald Trump mocked Hillary Clinton for telling the FBI that she didn’t “recall” something 39 times during a three hour-plus interview, but Trump himself responded the same way to Special Counsel Robert Mueller‘s written question 37 times.

About 10 times during the presidential campaign, Trump trashed Clinton over reports that there were 39 instances in which she told FBI investigators that she couldn’t recall something.

For example, during a September 8, 2016 speech in Cleveland, OH, Trump told the crowd “when she was interviewed by the FBI, she claims she couldn’t remember important events, 39 times.”

There were 37 different times in his written responses that Trump answered “I do not recall” or “I do not remember” pic.twitter.com/rBCpuEDkkP