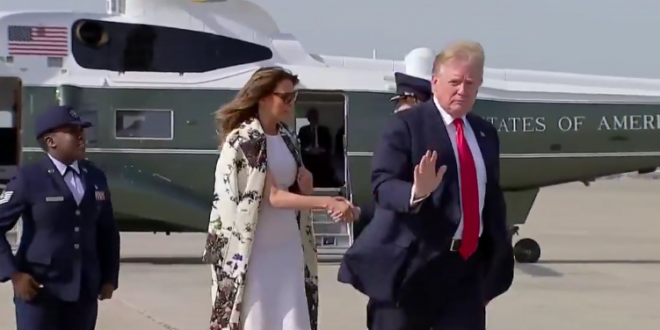 President Trump on Thursday surprised reporters in Washington by failing to speak at length about special counsel Robert Mueller’s report, a document he has framed as a clear vindication.

One day before the report’s release, Trump teased the possibility of staging his own press conference about the Russia probe after Attorney General William Barr’s, telling WMAL Radio “maybe I’ll do one after that. We’ll see.”

But Trump did not stage a formal news conference, nor did he come over to address a massive scrum of reporters gathered on the South Lawn to witness his departure on Marine One en route to Palm Beach, Fla., as he often does. He also did not speak to reporters at Joint Base Andrews before boarding Air Force One for his Easter weekend getaway.

So, @realDonaldTrump made his way to take flight, and didn’t even acknowledge reporters or anything. The first time ever, he had no words to say. The day of the #MuellerReport #MuellerThursday he’s silent. pic.twitter.com/6AHPLYqZOG

Here’s video of Trump leaving the White House with Melania without answering questions from reporters. Kellyanne Conway suggested earlier today that Trump would do one of his usual helicopter-side Q&A sessions before departing for Mar-a-Lago. No dice. pic.twitter.com/EPLOSCjW4O

With a thumbs up and a wave, Pres. Trump boards Air Force One with first lady Melania Trump, heading to Mar-a-Lago for Easter weekend following the public release of the Mueller report. https://t.co/jCJlAx2dhM pic.twitter.com/4yY2Nbtsc8