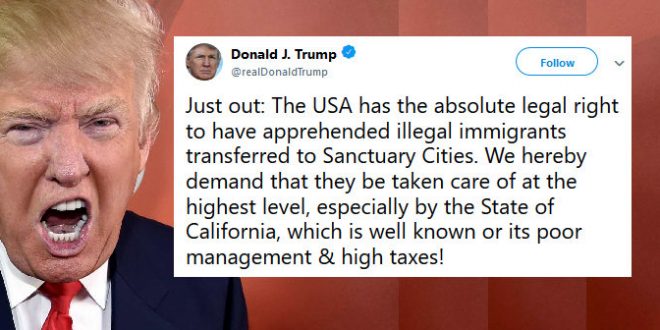 In a late night tweet on Saturday, President Donald Trump declared he had the “absolute legal right” to release detained undocumented immigrants into so-called sanctuary cities, and demanded that his request be fulfilled.

In his earlier rant, Trump claimed that the mayor of Oakland was not willing to receive the undocumented immigrants he had earlier threatened to release into the city.

That claim appears to be false. In an interview with National Public Radio on Saturday, Oakland Mayor Libby Schaaf said quite the opposite.

Just out: The USA has the absolute legal right to have apprehended illegal immigrants transferred to Sanctuary Cities. We hereby demand that they be taken care of at the highest level, especially by the State of California, which is well known or its poor management & high taxes!

….So interesting to see the Mayor of Oakland and other Sanctuary Cities NOT WANT our currently “detained immigrants” after release due to the ridiculous court ordered 20 day rule. If they don’t want to serve our Nation by taking care of them, why should other cities & towns?

Democrats must change the Immigration Laws FAST. If not, Sanctuary Cities must immediately ACT to take care of the Illegal Immigrants – and this includes Gang Members, Drug Dealers, Human Traffickers, and Criminals of all shapes, sizes and kinds. CHANGE THE LAWS NOW!

It’s time to stop fanning hate and division @realDonaldTrump – I’ve been consistent and clear: #Oakland welcomes all, no matter where you came from or how you got here. https://t.co/KWl2P9ps3k

Previous CHATTER AWAY: Overnight Open Thread
Next SNL Takes On Arrests Of Assange And Avenatti [VIDEO]