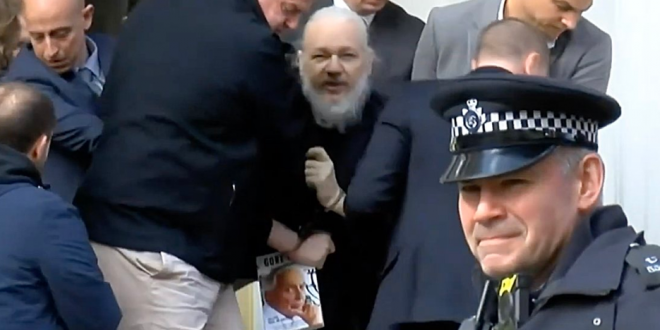 Julian Assange’s arrest at the Ecuadorian Embassy in London was carried out in a specific way to prevent him from pressing a mysterious panic button he said could bring dire consequences for Ecuador, its foreign minister said.

During this stay, Assange is accused of threatening Jaime Merchan, the Ecuadorian ambassador to the UK, with activating some kind of panic button that would bring down the embassy if he were arrested or felt in danger.

It is not clear exactly what form the “panic button” took: whether it was a physical device or a metaphor for some other easily activated insurance measure. It is also unclear what leverage Assange thought he had over Ecuador.

According to the above-linked article, Ecuadorian officials warned British authorities that Assange was not to be allowed back into his room during the arrest.

• WikiLeaks’ founder, Julian Assange, was arrested at the Ecuadorean Embassy in London on Thursday.
• Authorities engineered the timing and nature of the raid to stop Assange from accessing a panic button he mentioned in the past.