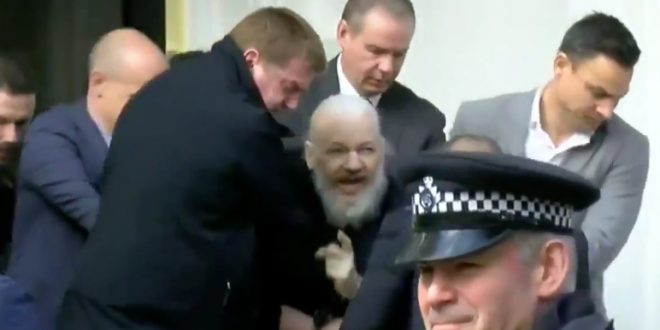 Julian Assange has been arrested at the Ecuadorian embassy in London, where the WikiLeaks founder was granted refuge in 2012 while on bail in the UK over sexual assault allegations against him in Sweden. At the time, Assange claimed that if he was extradited to Sweden he might be arrested by the US and face charges relating to WikiLeaks’s publication of hundreds of thousands of US diplomatic cables.

In a statement the Met police said: “The MPS had a duty to execute the warrant, on behalf of Westminster magistrates court, and was invited into the embassy by the ambassador, following the Ecuadorian government’s withdrawal of asylum.”

The home secretary, Sajid Javid, said: “Nearly seven years after entering the Ecuadorian embassy, I can confirm Julian Assange is now in police custody and rightly facing justice in the UK. I would like to thank Ecuador for its cooperation & @metpoliceuk for its professionalism. No one is above the law.”

The Australian national has maintained that if forced to surrender to authorities he would eventually be extradited to the U.S. to face charges. WikiLeaks has repeatedly claimed that the Justice Department is building a criminal case centered on the leaking of Democratic emails hacked by the Russians in the 2016 election.

Assange, 47, has always maintained that the source of the leaks was not Russia, contrary to the conclusion of U.S. intelligence agencies.

Julian Assange did not “walk out of the embassy”. The Ecuadorian ambassador invited British police into the embassy and he was immediately arrested.

URGENT: Ecuador has illigally terminated Assange political asylum in violation of international law. He was arrested by the British police inside the Ecuadorian embassy minutes ago.https://t.co/6Ukjh2rMKD

VIDEO: UK media outlets are broadcasting video claiming to be the moment Wikileaks founder Julian Assange was arrested and removed from the Ecuadorian Embassy in London after seven years. pic.twitter.com/0IBPWiVCNi

Previous CHATTER AWAY: Overnight Open Thread
Next Ecuador’s President: Britain Has Guaranteed Us That Assange Won’t Be Extradited To Death Penalty Country