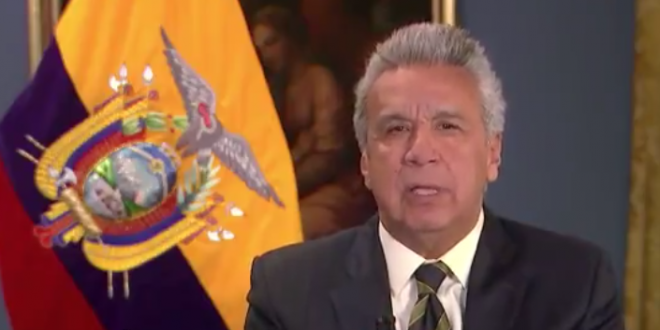 Ecuador’s President: Britain Has Guaranteed Us That Assange Won’t Be Extradited To Death Penalty Country

Britain has guaranteed to Ecuador that WikiLeaks founder Julian Assange will not be extradited to a country that has the death penalty, Ecuadorean President Lenin Moreno said on Thursday after Assange was arrested in London. “In line with our strong commitment to human rights and international law, I requested Great Britain to guarantee that Mr Assange would not be extradited to a country where he could face torture or the death penalty,” Moreno said in a video posted on Twitter. “The British government has confirmed it in writing, in accordance with its own rules.”

The President of Ecuador: In a sovereign decision Ecuador withdrew the asylum status to Julian Assange after his repeated violations to international conventions and daily-life protocols. pic.twitter.com/N7o6jvWXXz

"Julian Assange is no hero and no one is above the law," U.K. Foreign Secretary Jeremy Hunt says as the WikiLeaks founder is arrested. https://t.co/P3YUgThtKP pic.twitter.com/AXTTNuZjoH

Just confirmed: #Assange has been arrested not just for breach of bail conditions but also in relation to a US extradition request. @wikileaks @khrafnsson

Previous BREAKING: Wikileaks Founder Julian Assange Arrested After Ecuador Withdraws Asylum At Embassy [VIDEO]
Next Carlson: Calling Out White Nationalism Is A Racist Ploy By Democrats And Exactly How You Destroy A Country