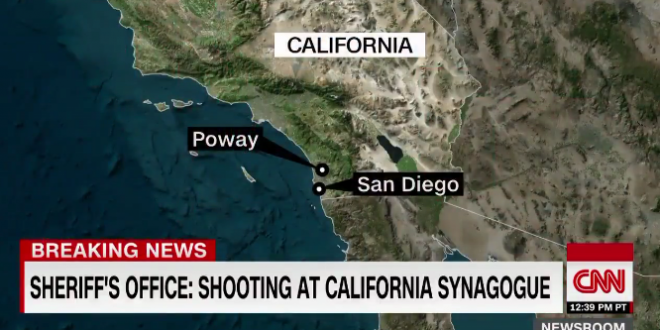 The shooting occurred at Congregation Chabad just before 11:30 a.m. Saturday marked the last day of Passover. “It’s a very important celebration for us. There’s lots of people inside, they’re praying,” Minoo Anvari told NBC 7. “Everybody was crying and screaming.” Anvari said her husband was inside during the shooting and told her someone came in, started cursing and shooting.

We are closely monitoring the reports of a shooting at a synagogue in Poway, California pic.twitter.com/ikst8rxwEQ

DEVELOPING: San Diego police have detained a man in connection with a possible shooting incident at the Chabad of Poway synagogue. https://t.co/dahvULOh0B pic.twitter.com/HFPazbgGHF

At least four victims of the synagogue shooting in San Diego were taken to a medical center. According to the synagogue’s website, they were attending a Passover celebration. https://t.co/dzVkYQGvbg

JUST IN: The San Diego Sheriff’s Department is investigating reports of a man with a gun near a synagogue in the city of Poway, California, according to the agency’s official Twitter account. https://t.co/ipGf6FPcYe pic.twitter.com/sbx9K7bKaV