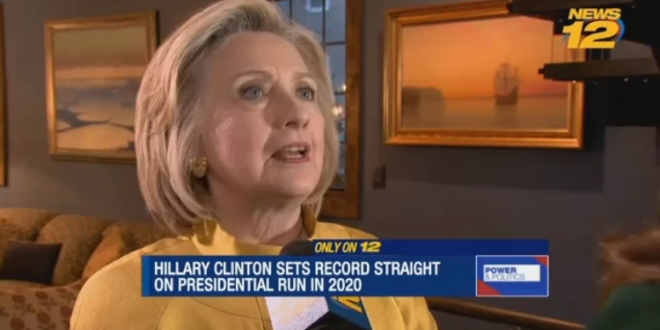 Hillary: I’m Not Running For Anything Again [VIDEO]

Hillary Clinton ruled out a 2020 presidential run for the first time on camera in an exclusive interview with News 12, pledging instead to take an active role by working with the candidates in the crowded Democratic field.

“I’m not running, but I’m going to keep on working and speaking and standing up for what I believe,” she told News 12’s Tara Rosenblum.

In her first local TV interview since the midterm elections, the former first lady and secretary of state opened up about 2016, 2020 and beyond. She expressed deep concerns about the state of American politics today — and vowed to be vocal about those concerns.

In the clip below, Clinton just laughs at the suggestion that she might one day run for New York governor or mayor of New York City.