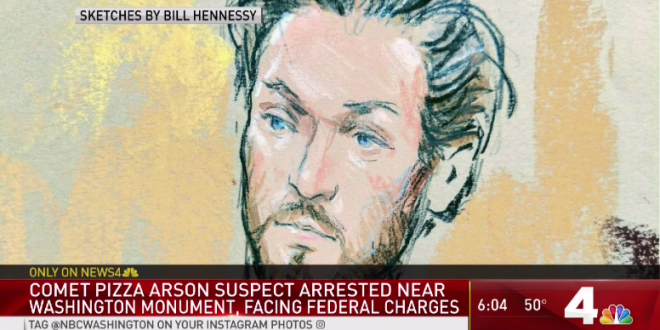 A 22-year-old man from California has been charged with setting fire last month to curtains at Comet Ping Pong pizza shop in the Chevy Chase neighborhood of Northwest Washington, according to federal law enforcement authorities.

Ryan Jaselskis, also known as Ryan Rimas, is charged with maliciously damaging or destroying by means of fire. Magistrate Judge G. Michael Harvey ordered the Northridge, Calif., man detained until a Feb. 19 hearing in U.S. District Court. His attorney with the federal public defender’s office did not respond to an interview request; relatives could not be reached.

While court documents allege Jaselskis set the Jan. 23 fire using lighter fluid, authorities provided no motive. Comet Pizza was in the national news in 2016 when it was targeted by a North Carolina man who showed up there with a fully loaded AR-15 semiautomatic rifle and a revolver seeking to investigate a viral Internet rumor known as “Pizzagate.”

Federal authorities have not yet said if they know Jaselskis’ motive for setting the fire inside Comet. But a YouTube page that features videos from his acting career that is in the name of his parents posted a video promoting the QAnon conspiracy theory on January 23, the same day the fire was set.

The QAnon theory is linked to Pizzagate and features similar themes, that there is an elite class of child predators running a sex trafficking ring around the country. QAnon believers claim that President Trump is leading a purge of that elite class and has already arrested several offenders, including Clinton.

U.S. Park Police caught up with him on Feb. 5, after prosecutors say he climbed the fence around the Washington Monument.

Video obtained by News4 shows two officers trying to restrain a man at the base of the Monument as he fights back wildly. The man appears to punch at the officers. He falls at least twice and gets back up.

An officer runs at him with a baton, but he continues to resist. Finally, an officer uses a stun gun on the man. He brings his hand to his chest and then falls backward.

Federal prosecutors charged 22 yr old actor from CA in @cometpingpong fire. Suspect caught by @usparkpolicepio who tased him outside Washington Monument. Jacket worn in surveillance video appears to be same jacket as in tasing video & publicity headshot of actor with same name pic.twitter.com/dtzKCGaJx1