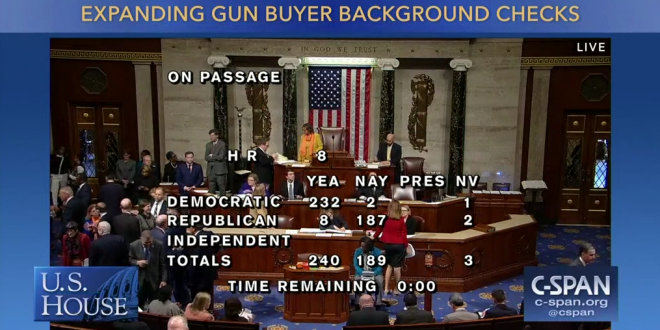 The House passed what advocates call the most significant gun control measure in more than two decades on Wednesday when it approved the first of two bills aimed at strengthening the federal background check system for firearms purchases.

The bill will likely stop in the House, though, as the Senate is unlikely to take up the measure and, even if it does, the president likely would not sign it. The vote on the first bill dubbed the Bipartisan Background Checks Act of 2019 passed largely along party lines 240 to 190.

A second bill lengthens the number of days a firearm dealer must wait for federal background checks to be completed. Currently, the wait time is three business days. The bill, which is expected to be taken up Thursday, would extend it to 10 business days.

We’ve lost more Americans to gun violence at home than to the Revolutionary War, the Civil War, World War I, World War II, the Korean War, Vietnam War, the Iraq War, the Afghan War combined. Proud to have voted YES on #HR8 which passed the House today! #EndGunViolence pic.twitter.com/gJRfhGViaB

Dems celebrating on the House floor as gun control activists cheer and yell “thank you” from the gallery. This would be the most significant gun control reform in many years… but the Republican-controlled Senate and President Trump have said they will block it.

To the New Jerseyans who stood up after Parkland, and the shooting at the Tree of Life Synagogue, and asked me to go to Washington and help pass good gun safety legislation: Today I voted for #HR8, a bipartisan universal background check bill.