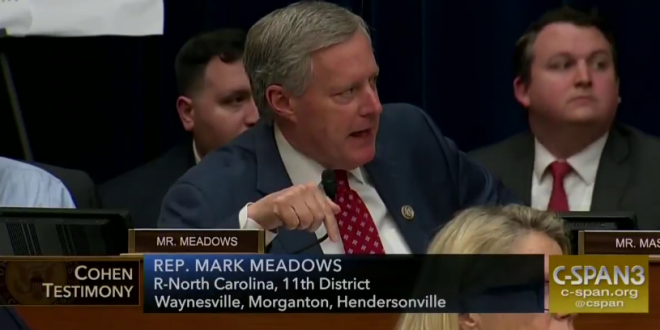 Michael Cohen’s testimony was derailed for several minutes this afternoon after Freedom Caucus member Mark Meadows flipped out over Rep. Rashida Tlaib’s implication that his having trotted out a black former Trump employee as evidence of Trump’s non-racism was itself a racist act.

Meadows demanded that Tlaib’s comments be stricken from the record but withdrew that request after some back and forth with Tlaib and House Oversight Committee Chairman Elijah Cummings.

Mediaite then seized upon the scene with this birtherism reminder:

At a Tea Party Express forum in June of 2012, Meadows took the stage and told the crowd that “the more we find out, the more we realize how wrong the directions were going.”

Meadows would later call the remarks “a poor choice of words on my part more than anything else. I believe he’s an American citizen and I believe, in my district, he is going to lose overwhelmingly.” But that didn’t stop him from using the lie to whip that crowd into a frenzy, which some might call a racist act.

Rep. Mark Meadows tried to refute Michael Cohen’s assertion that Trump is racist by pointing to Lynne Patton, a black employee of the Trump administration. pic.twitter.com/We9H8nQEZd

WOW — @RashidaTlaib accuses Mark Meadows of racism for using a black Trump administration official as a prop earlier during the hearing. Meadows interrupts her to “ask that her words be taken down.” pic.twitter.com/DK6rjmCNw8